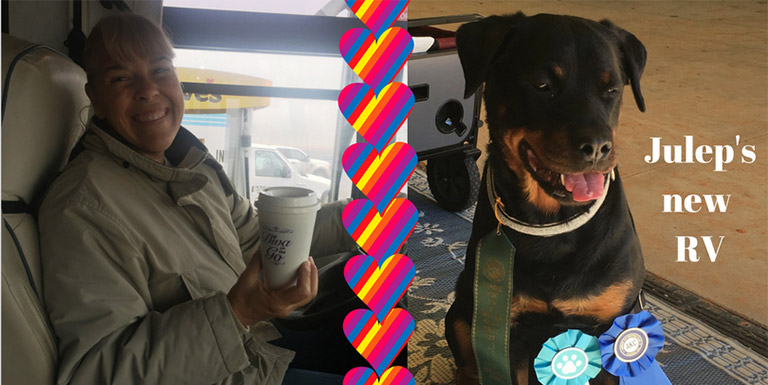 Last week, my client and good friend Cathy and I brought home Julep’s new dog show home, a Class A RV. Cathy and Julep will be sharing it with me and my three shelties at future dog shows. Thinking back on the journey, it reminded me of the different perspectives and viewpoints of others.

We flew up to Connecticut in mid-February. With the help of some good RV friends, we planned our best route to drive the RV home. Our drive took us through a section of winding Pennsylvania road and then down through each state to Florida. A Class A RV is quite large, similar to driving a big bus or a truck. Since I have not driven in a northeastern winter in over 13 years and have never driven anything this big, I was a bit nervous. Actual driving time would be over 20 hours.

Three days without our dogs! That was going to be a long time on the road. RVers tell me it is “seat time”!

We arrived at the garage where the RV was being stored and began our long trip home. The first day I drove it for almost 6 hours and was white knuckling it almost the whole way. It does not feel like my current, much smaller Class C. The steering is so sensitive; it seems that one breath can change its direction. The windshield is huge and feels like a glass house. The weather flirted with freezing temperatures. The last two hours we went through some of the thickest fog I have ever seen. Trucks and cars flew by us on this winding highway, but I had to keep my speed slower because I was still not comfortable controlling it. It was dusk and getting dark quickly. I knew other drivers would get upset, but I just was not willing to go too fast in those conditions.

The original plan was to pull off the highway if the weather was rough, but there was no place that we could find that was safe to turn off with such a big RV, so we kept plugging along. We discovered we had a CB and we could hear other truckers talking. That was nice until I heard some choice words … “If they are not comfortable driving, they should get off the (expletive) road!” I don’t think they were talking about us, but they could have been. If they only knew that we tried to find every other way possible to transport the big bus! We finally made it safely to the first RV campground.

The campground was not the nicest one. The RV sat on quite unlevel, muddy ground and it was dark and cold. There were wood planks and other garbage scattered around the area. The RV spot was tight, curved and squished between several trees. As the attendant guided me into the tight spot, I drove over a tire rim that was just left there!

We did not know how to use the levelers yet. We were so tired that we decided just to rough it, stay there, and get an early start the next day. The ground was so off level that Cathy kept sliding up and hitting her head while she tried to sleep. As I got out of bed in the morning, I was groggy and forgot how angled we were. I took one step and fell on my knees, hearing a loud THUMP! Ouch! I started laughing so hard I could not contain it. Cathy started laughing along with me, and before you knew it, it was like a teenage sleepover. We were giggling and laughing so hard we were squealing, which made us laugh even harder!

The second day I drove about 11 hours, and Cathy continued all of the navigating. I was getting more comfortable, and I could relax more and think clearer, so we figured it best for me to continue and give Cathy some driving time the next morning.

As the trucks went whizzing by, I could see some of them weaving a bit on the road, sometimes going over the lines. When I drove my car, van, or even my smaller RV, I always felt that those truckers were just not paying attention! Now, I began to understand why that was happening to them, and how it felt. As careful as I was, at times it happened to me. A crosswind, a vehicle passing by, a change in the road, caused the RV to shimmy a bit. I tried to keep it centered, but the steering took a moment or two to stabilize. As cars entered the highway, I had to make a quick decision to slow down and allow them in, or speed up to get ahead. You can’t just slam on the brakes of any rig that big! You have to ease into it as much as possible because there is too much weight pushing forward. 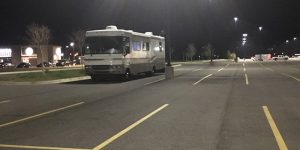 I could see how nerve-wracking it was for Cathy in the passenger seat. Almost as much as it was for me! I can still hear her saying “uh oh, move over, you are getting too close!” I was staying as close to the broken white line on the driver’s side as possible. It looked like it was in my lap, and the trucks looked so close to my window! I know it felt the same to her, and it is uncomfortable when you drive most of the time to be in the passenger seat. You have no control. Later in the week it was my turn to be in the passenger seat, and it felt almost as scary, and I could hear myself telling her she was too close, but it did not feel that way to her! While driving it, she said, “I was wondering why you kept both hands on the wheel the entire time. Now I know!”

After over 20 hours of driving the “big doggy bus” I found myself thinking about different perspectives and how it looks to us from one side of the “fence” to the other. As the saying goes, ‘the grass is always greener…” The saying is so true! For almost 30 years I have been in breed competition, obedience competition, and agility competition, and competitors often have a lot to say about another group that they have not experienced from the driver’s seat. The opportunities have been there for me to see life from many sides. Although I always do my best to be respectful,  I have a new found respect for truck drivers and I will give them more room on the road now than ever. Maybe I have a small idea of what it might be like for them.

Another point of view

I was at a dog show when I heard a judge give an interesting speech at the briefing. She was talking about the agility show, and I will paraphrase:

“Humans can read the numbers of the course. We read and obsess over the course maps for an hour or two. Then we walk the course for eight to fifteen minutes or as long as the judge allows. The handlers ahead of us make their mistakes as we watch, memorize and choose our strategy for another hour. Then we ask our dogs to run it perfectly in thirty to sixty seconds the first time they see it — just because we tell them too.”

Are we in the driver’s seat? Is the dog a passenger?

Put yourself in someone else’s shoes, your dog’s paws — or go from the driver’s seat to the passenger seat for a day. See how it feels to be on the other side. Enjoy a different view!

This message is only visible to admins. 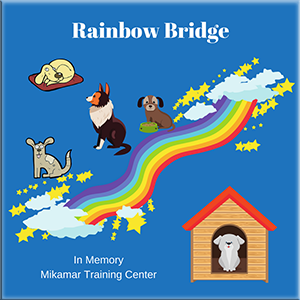